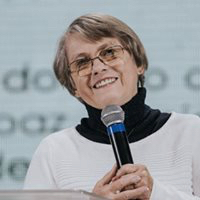 Connie Parker is a wife of 54 years, a mom of 2, a grandmother of 6, and a retiree – twice!  She was a geophysical programmer for three years, then a stay-at-home mom for ten years.  She then returned to the corporate world working for seventeen years as an Information Technology Manager for a major oil company and retired in 1999 to become the Director of Women’s Ministry at her church.  Eleven years later she retired from that position, went back to school, and earned a Master’s degree in Business Administration.  In 2015, at the request of Global Advance, she wrote “Raising Up Modern Day Esthers,” a leadership handbook for Christian women, and in 2016 initiated a mentoring program to raise up godly mentors for women in leadership globally. In this season of life, her desire is to serve the Lord and enlarge His kingdom by teaching women biblical leadership principles.   She and her husband Deane currently live in Plano, TX.

Connie graduated from the University of Western Ontario with a bachelor’s degree in Honors Mathematics in 1967 and from Bakke Graduate University with an MBA in 2014.